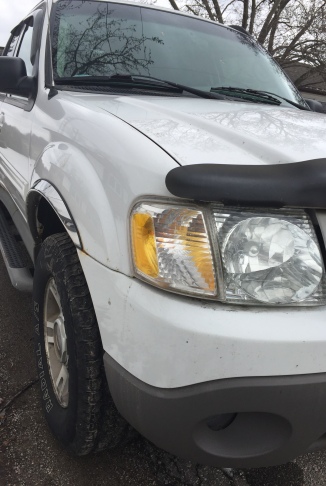 I may have just spent a solid 10min sitting in the drivers seat of our truck in the driveway with tear-filled eyes and a heavy heart.  It might be strange to you but for me it is letting go of almost a decade of adventures.

Our truck was just my other half, Pauls, for a couple of years.  He bought it when it was 4yrs old; 2yrs before he met me.  11yrs ago to this date it officially became his – funny how things work out.  Initially he looked at others that were larger with a smaller cab but ultimately decided on this – now old – gal.  The truck that is 😉 .

Together living our rather laid back dating lives we went everywhere in it.  My vehicles were always less than ideal so the truck was the “good” vehicle.  Seasons came and went and eventually it would be driving my pregnant self to OB appointments when I was pregnant with Lilah and midwife appointments when I was pregnant with Max.  We brought both of our babies home from the hospital in the truck.  It took them up north for vacation for the first time among so many other firsts for the kids and it took my beloved pups places too.  In fact the truck also brought Wally home to us.

The past 2yrs I have driven it as my daily driver which has meant taking the kids everywhere in it on PA days, holidays, summer vacation and everything in between.

I have been over the moon happy in that truck, I have also cried parked behind the wheel when times have been tough.  So much happened during the time we have had it.  Perhaps that is what this sense of loss really is – recognizing times past.

Now the truck is full of a lifetime of marks left by us and our travels.  Cracks and rust, tears and leaks – it’s aged much like we do.  As much as I would love to hold on to it until it falls apart in the driveway that isn’t very practical.

Last week we brought home our new to us vehicle and it’s time to officially part ways with the truck.  It’s time to take pictures of all it’s quirks with my mind and smile.  It’s time to let go and move on.

This site uses Akismet to reduce spam. Learn how your comment data is processed.